Save 15% on Select Items
Offer Ends: January 22 Discount applied in cart. May not be combined with other discounts or specials.
Brands A-Z Life Extension
Categories Supplements Antioxidants Ubiquinol, CoQ10

Create a New List:
!List Name Required
Shipping Saver
Shipping Saver items cost less to ship, so we can pass the savings along to you!
Combo Offer: Save kr.13.54 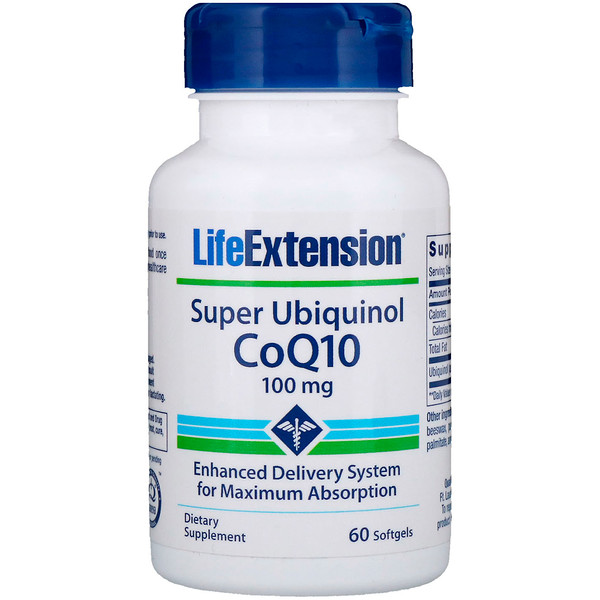 #17 in Ubiquinol, CoQ10 >
Frequently Purchased Together

Coenzyme Q10 (CoQ10 for short) is a potent antioxidant that supports cardiovascular health and is absolutely essential for healthy mitochondrial function. The traditional form of CoQ10, ubiquinone, is difficult for your body to absorb — but the ubiquinol form, like that in Super Ubiquinol CoQ10 absorbs up to 8 times better!

Benefits at a Glance

CoQ10 is an essential component of healthy mitochondrial function. The mitochondria are the cell’s energy powerhouses, and CoQ10 is required to convert the energy unlocked from fats and sugars into usable cellular energy.

Because of this, CoQ10 is most highly concentrated in the cells of your body’s “workhorse” organs — like your brain and your heart. But CoQ10 is also a potent antioxidant, protecting important proteins and mitochondrial DNA from oxidative damage. Unfortunately, CoQ10 levels naturally deplete over time.

The aging process reduces CoQ10 levels in the heart muscle wall by 72%. The frightening result is that the dual effects of aging and using statin drugs simultaneously could result in a severe CoQ10 deficit, leading to seriously diminished cellular vitality in vital organs like your heart.

Remember, traditional ubiquinone forms of CoQ10 are notoriously difficult for your body to absorb. And since the most important factor of any supplement is how much nutrient actually makes it into your bloodstream, you should know that scientific studies show ubiquinol CoQ10 absorbs up to 8 times greater than ubiquinone.

Take one (1) softgel with food once or twice daily, or as recommended by a healthcare practitioner.